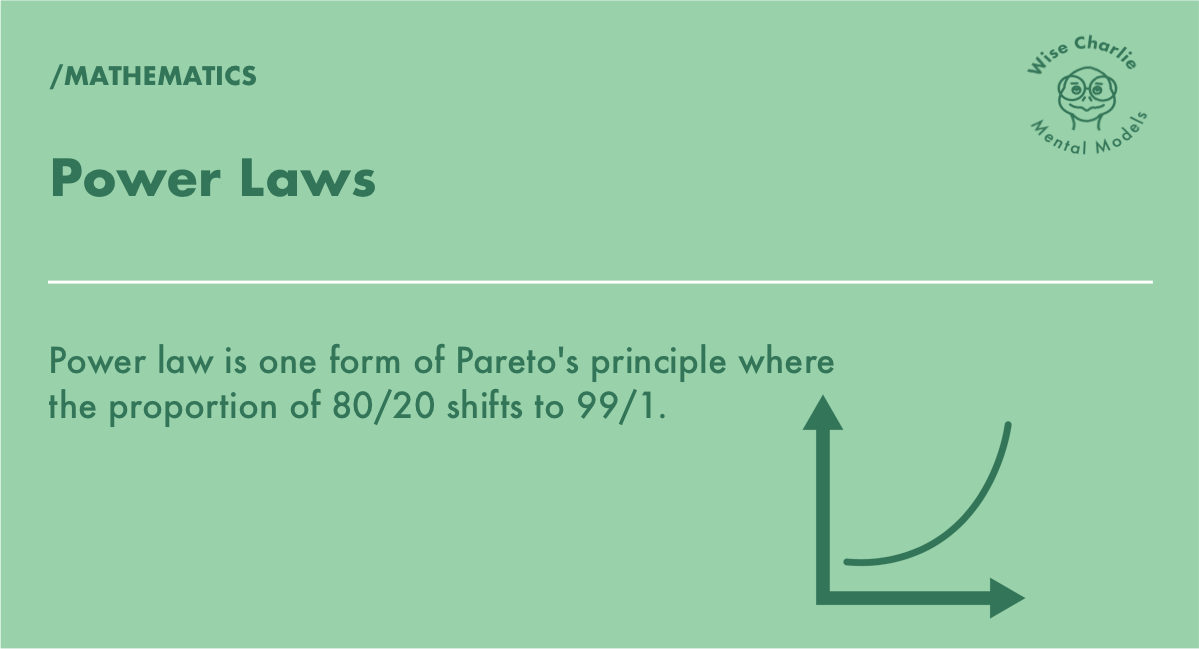 Power law is one form of Pareto's principle where the proportion of 80/20 shifts to extreme proportion.

Scenario 2: Often you hear the top 1% of American household owns 99% of the wealth. The combined wealth of top 1% is orders of magnitude greater than all of 99% combined. This pattern of income distribution can be attributed to the mathematical principle of power law. This is why billionaires are a tiny fraction of our total population.

A relationship between two quantities whereby a small change in one, results in a large change in the other. If you double the diameter of a circle, the area would quadruple. Power law is an extension of Pareto's principle which indicates 80% of the outcomes comes from 20% of the action. For example, 80% of the sales come from 20% of the customers; 80% of the world's internet traffic go to 20% of the websites. But a power law skews towards a more extreme proportion. For example, 99% of the traffic goes to 1% of the websites.

A cautionary note, the technical analysis of this mental model is quite deep, but it is necessary to understand how the model works.

It is primarily in the study of statistical distributions that the name “power law” is used, but mathematically, a power law cannot be a probability distribution, but a distribution that is a power function involving two numbers, the base and the exponent.

In math class, we all once asked, why even care about exponents? You will soon know why! Understanding any complex system such as income inequality or earth quakes require an understanding of power laws. Let's take a look at power laws in mathematical terms to get a better understanding:

Y is a function, X is the variable you can change, N is the exponent that you can scale and M is a constant that does not change.

To double a chocolate recipe, you would need twice as much as cocoa. This is simply a linear relationship.

How about non-linear relationships? It is much different because of complex systems. For example, an animal twice as big may only eat 75% more food than we do. This means larger animals are more efficient eaters than the smaller ones. Let's use the most successful Olympian of all time, Michael Phelps, to understand non-linear relationships.

Michael Phelps has a low and a constant M because of some combination of his natural ability to swim and training history. X, the base is a number he has a control over, and N, the exponent is between 0 and 1. Thus the relationship between X and Y becomes less proportional. Let's plug some numbers in now.

Let's compare the two scenarios from above and see how it translates into his performance and training. In the first scenario above, Michael Phelps swims 4 extra miles (X variable for which he has control over) during his training which leads to an endurance of 2 (Y). In the second scenario, he has to swim 4 times more (16 miles) to double his endurance from 2 to 4.

As you increase X, you are likely to see an exponent of N decline. So increasing X of 16 to 64 is unlikely to double the endurance again. Eventually, the ratio of swimming extra lanes to an endurance will become nearly infinite. This is called diminishing returns— no matter how much more training time you put in, it will yield to a negligible or less positive result.

What happens when an exponent of N is negative? Le't take a scenario where Michael Phelps is injured.

In the first scenario, swimming 4 extra miles leads to only 0.5 a mile of endurance. In the second scenario that progress shrinks by half again. This wouldn't be smart way to train for Michael Phelps because more training leads to less endurance. This is an inverse relationship between the exponent X and Y.

Power law is complex to understand, but once you understand it becomes easy to see the world as is.

The greatest shortcoming of the human race is our inability to understand the exponential function. — Albert Allen Bartlett

We already know, when N is 1, it is called a linear relationship, also called a first-order power law.

When N is 2, it is called a second-order power law. Commonly found in physics concepts such as kinetic energy.

When N is 3, it is called a third-order power law. This law is applicable in wind turbines.

When N is 4, it is called a fourth-order power law. This law is applicable in heat radiation.

We don’t live in a normal world; we live under a power law. — Peter Thiel

As per everything else, power law should not be a singular strategy to achieve an objective. Like everything else, it requires a detailed analysis. As explained earlier, Michael Phelps cannot just rely on putting in more time to get a small percentage of endurance. Power laws have limitations such as law of diminishing return. The exponent starts declining in some applications, no matter how much extra time you put in.

There is a perfect example of diminishing return to happiness when you make more money. Most people assume making more money will bring more happiness. But that is not the case. Being able to enjoy basic needs will certainly bring happiness. So, earning from $20k to $60k will bring in joy, but earning from $100k to $115k leads to little change in well-being.

Power law is applicable in many systems, especially complex systems. Below are just to name a few: