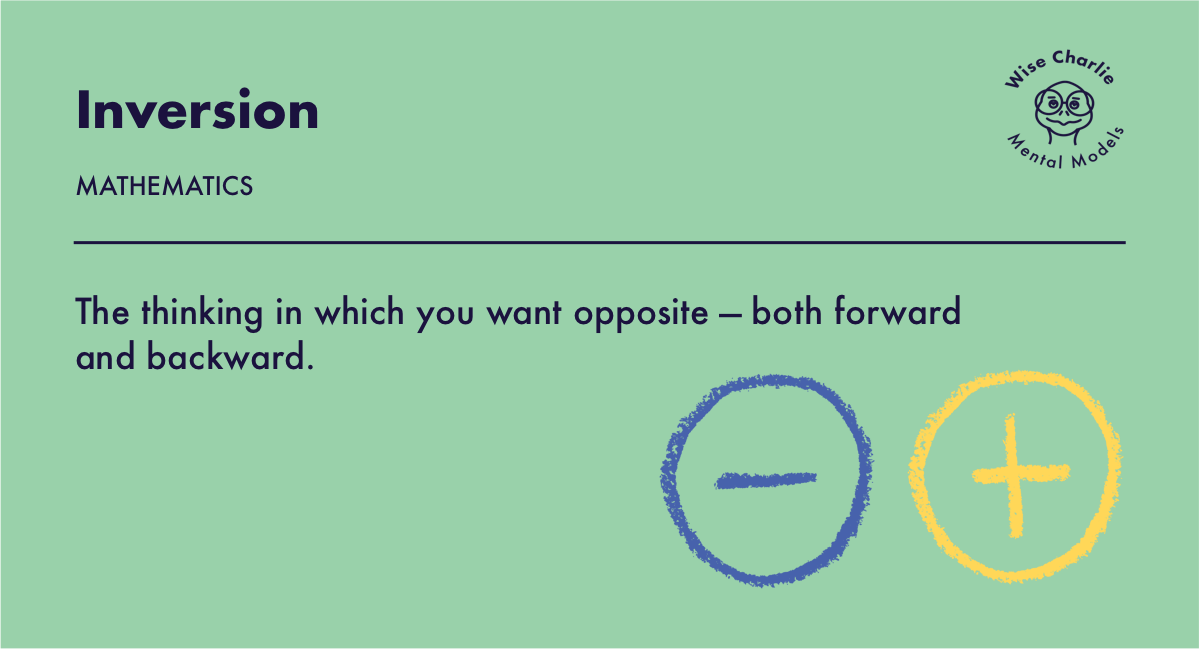 The thinking in which you want opposite — both forward and backward.

Regardless of age, everyone is thinking about success. A common question amongst many—what does success look like? But what if we went even one step further about this curiosity? What does failure look like?

Thinking through inversion broadens your risk analysis in every aspect of life.

The thinking in which you want opposite — not only thinking forward but also thinking backward. This trick is a powerful idea because it de-biases us from having blinders. The goal of this exercise is to envision the negativity in any event so that it can be avoided.

Inversion is the opposite way to do something or, to do something in reverse. This can be particularly useful in solving complex problems, helping to see them in a different way. The inverse of a simple addition would be to subtraction from the total.

The power of inverse thinking is a rare and crucial skill that all great thinkers use to their own advantage. Becoming successful—is the mantra of human ideology that dominates reality. Complimenting opposite of imagining success with imaging failure can give you a full picture before you make any decisions. Being positive and negative is complimentary. Avoiding failure is equally important in being successful.

Stoics (early 3rd century BC)—followed the inversion process to eliminate the worst case scenario by thinking backwards and avoiding any failures. The ancient Stoic philosophers like Marcus Aurelius, Seneca, and Epictetus regularly conducted an exercise known as a premeditatio malorum, which translates to premeditation of evils. The goal of this exercise was to envision the negative things that could happen in life. For example, the Stoics would imagine what it would be like to lose their job and become homeless. Or to suffer an injury and become paralyzed. Or to have their reputation ruined and lose their status in society.

Carl Jacaboi (1804–1851) was a German mathematician, who made contributions to elliptic functions, dynamics, differential equations and the number theory. These theories are still applicable in our modern age. How was Jacobi able to contribute so much to scientific fields during his career?

He was known for his ability to solve complex problems by following a simple strategy—Invert, always invert (man muss immer umkehren), conveying his belief that the solution of many hard problems can be clarified by re-stating them in an inverse form. He would write down the opposite of the problem he was trying to solve. By conducting this exercise he was able to resolve many theoretical problems.

Subtractive knowledge is when you envision negative things and then subtracting what is not important or what is wrong. Additive measures manifest in form of an urge to do something about a problem which may not need any intervention. Subtractive measures adhere to the philosophy of don’t try to fix something which ain’t broken. Nassim Taleb also employs subtractive epistemology. He argues that the greatest and most robust contribution to learning and knowledge consists of removing what we think is wrong. What does not work, that is negative knowledge, is more robust than positive knowledge.

Avoiding stupidity is another way to apply inversion in your life. It’s a choice between avoiding stupidity and seeking brilliance. You can avoid a bad marriage by being loyal to your significant other. Or in life, you can avoid death by staying away from alcohol and drugs. Another way to apply inversion is to not only find role models but also find anti-role models — people you don’t want to resemble when you grow up. You want to avoid the path they took. Ambitious young people can find a lot of success in this type of thinking.

Another great implementation of inversion was by the CTO of Pandora. Pandora faced immense competition from Spotify, Apple Music, Google, and Amazon. However, it still managed to stay alive despite the heavy competition. 90 days is the length of one quarter. That’s how far you can reasonably think and plan ahead when you’re in hyper-growth. He asks—“And there’s a question you have to ask yourself at the start of every quarter: What would be stupid for us not to do in the next 90 days?”

Charlie Munger is one of the greatest thinkers alive today. Charlie Munger has adopted an approach to solving problems that is the reverse of the approach many people use in life. He avoids misery. Munger once gave a speech where he spoke about a famous Johnny Carson talk in which the comedian described all the ways one can be miserable. Munger is also famous for saying “Invert always invert.”

Think forwards and backwards — invert, always invert. Many hard problems are best solved when they are addressed backward. The way complex adaptive systems work and the way mental constructs work is that problems frequently get easier, I’d even say usually are easier to solve, if you turn them around in reverse. In other words, if you want to help India, the question you should ask is not “how can I help India,” it’s “what is doing the worst damage in India? What will automatically do the worst damage and how do I avoid it?” Figure out what you don’t want and avoid it and you’ll get what you do want. How can you best get what you want? The answer: Deserve what you want! How can it be any other way? The great Algebra pioneer Jacobi knew that it is in the nature of things that many hard problems are best solved when they are addressed backward. In life, unless you’re more gifted than Einstein, inversion will help you solve problems.

Let me use a little inversion now. What will really fail in life? What do you want to avoid? Having a certain kind of temperament is more important than brains. You need to keep raw irrational emotion under control. When you have a huge convulsion, like a fire in this auditorium right now, you do get a lot of weird behavior. If you can be wise [during such times, you’ll profit]. It is remarkable how much long-term advantage [we] have gotten by trying to be consistently not stupid, instead of trying to be very intelligent.