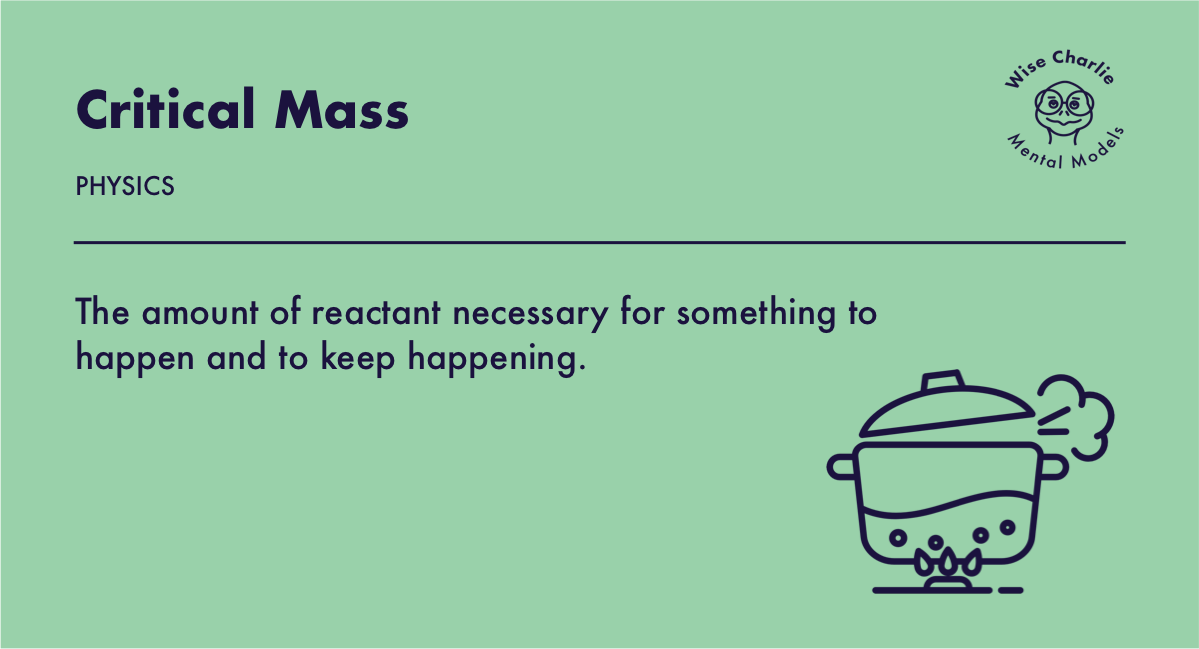 The amount of reactant necessary for something to happen and to keep happening.

A tipping point when the change is slow at first, but then suddenly leads to an explosive change. The concept is critical in understanding the phenomenon of virality.

When a nuclear reaction happens, neutrons are released and can cause another reaction. The smallest amount of a material needed to self-sustain a nuclear chain reaction is said to be the critical mass.

In social dynamics, critical mass is a sufficient number of adopters of a new idea, technology or innovation in a social system so that the rate of adoption becomes self-sustaining and creates further growth. The point at which critical mass is achieved is sometimes referred to as a threshold within the threshold model of statistical modeling.

The notion of a critical mass—that comes out of physics—is a very powerful model.

Critical mass is defined as the minimum amount of a fissile material required to self-sustaining fission reaction. Critical mass might vary on several factors such as—material, density or its shape. In some nuclear reactions, a reflector made of beryllium is used to speed up the process of reaching critical mass.

Both Critical Mass and Tipping Point have become interchangeable.

Mark Granovetter has done research on a model of how fads are created. Consider a hypothetical mob assuming that each person's decision whether to riot or not is dependent on what everyone else is doing. Instigators will begin rioting even if no one else is, while others need to see a critical number of trouble makers before they riot, too.

This threshold is assumed to be distributed to some probability distribution. The outcomes may diverge largely although the initial condition of threshold may only differ very slightly. This threshold model of social behavior was proposed previously by Thomas Schelling and later popularized by Malcolm Gladwell's book The Tipping Point.

Malcolm Gladwell describes tipping point as “the moment of critical mass, the threshold, the boiling point.” He describes ideas, products, messages and behaviors spread just like viruses do.

Look at the world around you. It may seem like an immovable, implacable place. It is not, with the slightest push in just the right place it can be tipped. — Malcolm Gladwell

A critical mass can form from a group of people who make a drastic change by altering their behavior, opinions or actions. When enough people follow new ideas, it can become a reality.

A critical mass can occur from tiny natural evolution. Andrew H Knoll, a famous geologist, in his book A Brief History of Earth explains that the early Earth was swaddled by a thick atmosphere, but it was air without oxygen. But that changed when Cyanobacteria came along causing the Earth's Greatest Oxygenation Event.

Earth's Greatest Oxygenation Event (GOE) was revolutionary, and Cyanobacteria—the only bacteria capable of oxygenic photosynthesis—were the heroes of the revolution. Cyanobacteria gained the upper hand in a world that long favored different photosynthetic microbes. They dominated the planet by producing more oxygen than carbon.

Peter Bevelin is an author of an excellent book Seeking Wisdom in which he explains critical mass.

At a certain scale, a system reaches a critical mass or a limit where the behavior of the system may change dramatically. It may work better, worse, cease to work or change properties. Small interactions over time slowly accumulate into a critical state–where the degree of instability increases. A small event may then trigger a dramatic change like an earthquake.

A small change may have no effect on a system until a critical threshold is reached. For example, a drug may be ineffective up until a certain threshold and then become effective, or it may become more and more effective, but then become harmful.

Another example is from chemistry. When a system of chemicals reaches a certain level of interaction, the system undergoes a dramatic change. A small change in a factor may have an unnoticeable effect but a further change may cause a system to reach a critical threshold making the system work better or worse.

A system may also reach a threshold when its properties suddenly change from one type of order to another. For example, when a ferromagnet is heated to a critical temperature it loses its magnetization. As it is cooled back below that temperature, magnetism returns.

Adding success factors so that a bigger combination drives success, often in non-linear fashion, as one is reminded by the concept of breakpoint and the concept of critical mass in physics. Often results are not linear. You get a little bit more mass, and you get a lollapalooza result. And of course I’ve been searching for lollapalooza results all my life, so I’m very interested in models that explain their occurrence. An extreme of good performance over many factors.