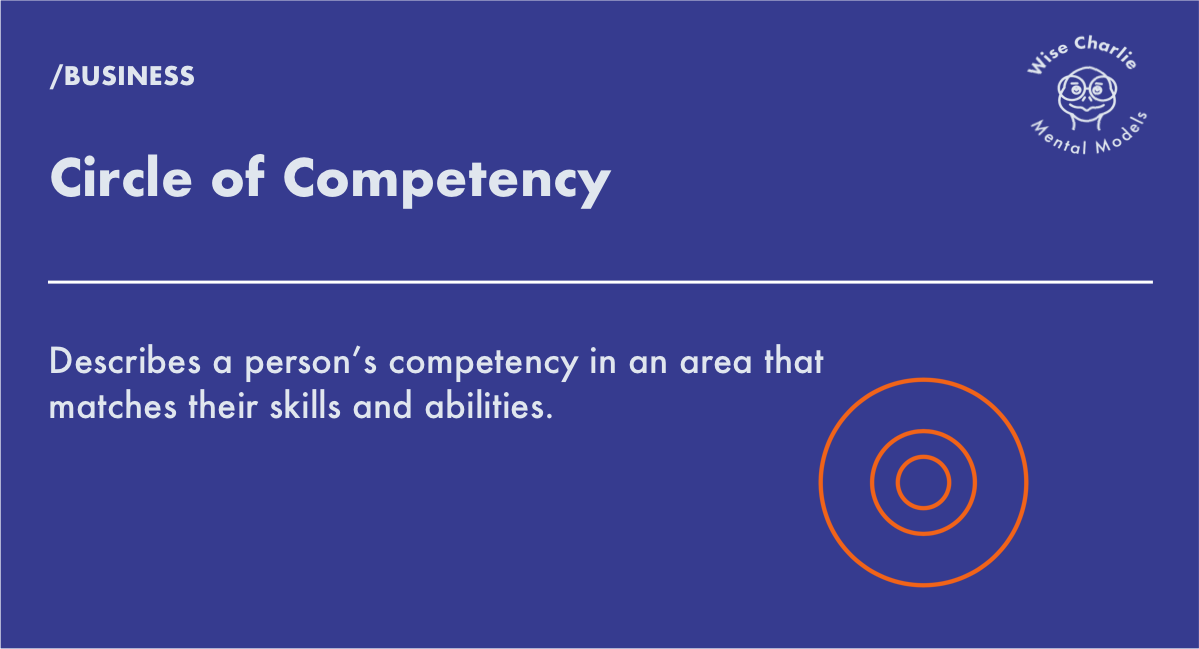 Describes a person’s competency in an area that matches their skills and abilities.

Scenario 1: If the great swimmer Michael Phelps tries to be the great basketball player Michael Jordan, it might not work at the onset. But put him in the pool and he will be unstoppable.

Scenario 2: Technology companies don't own janitorial operation. They most likely outsource the non-core business operations because it does not align with their core operations.

The circle of competency describes the skills and abilities of a person. These competencies can be innate or acquired through experiences over time. An understanding and knowing the boundaries of one's competencies are vital to avoid downfalls and stress.

The imaginary circle of competence lies as a small circle within a much larger circle. The larger circle represents what an individual thinks they know but are far from being an expert in. Conversely, the smaller circle represents what they actually know and could be considered an expert in. To be successful, widening the competency circle is much more valuable than jumping from one circle to another.

Warren Buffett and Charlie Munger coined the term, but Andrew Carnegie also concentrated on this similar concept. Carnegie was a business icon during his era. In the Autobiography of Andrew Carnegie, Carnegie gives the following advice:

I believe the true road to preeminent success in any line is to make yourself master in that line. I have no faith in the policy of scattering one’s resources, and in my experience I have rarely if ever met a man who achieved preeminence in money-making—certainly never one in manufacturing—who was interested in many concerns. The men who have succeeded are men who have chosen one line and stuck to it.

Warren Buffett wrote a letter to Berkshire Hathaway shareholders in 1996 that shows what it means to operate within a circle of competency:

What an investor needs is the ability to correctly evaluate selected businesses. Note that word “selected”: You don’t have to be an expert on every company, or even many. You only have to be able to evaluate companies within your circle of competence. The size of that circle is not very important; knowing its boundaries, however, is vital.

Stick to what you know and know your limitations. Even the most famous icons were self-aware of that.

I’m no genius. I’m smart in spots—but I stay around those spots. — Tom Watson Sr., Founder of IBM

I consider that a man’s brain originally is like a little empty attic, and you have to stock it with such furniture as you choose. — Sherlock Holmes

The first thing to notice about specific knowledge is that you can’t be trained for it… [it’s] found much more by pursuing your innate talents, your genuine curiosity, and your passion… [it’s’] the knowledge that you care about. Especially if you’re later in life, let’s say your post 20, 21, 22, you almost don’t get to choose which specific knowledge you have. Rather, you get to look at what you have already built by that point in time, and then you can build on top of it. — Naval Ravikant

Your circle of competence is the subject area that matches your skills and expertise. But, many of us feel that our circle of competency is bigger than it actually is. Overconfidence starts leading us in a wrong direction. Reading a few set of books does not make someone a doctor or a lawyer. Those expertise come from decade of studies and practical experiences. It cannot be developed overnight by quickly jumping from one circle to another.

To improve the odds of success in life and business, the perimeter of your circle of competency needs to be defined so you can operate within the circle. Over time, the circle expands depending on your hard work and luck, but never fool yourself that you can be a master of all circles.

What is inside a circle of competency?

It is shaped by many things. First, we are naturally good at something because of our innate abilities. For example, a two year old might be really good at playing a piano. Second, as we get older, we accumulate skills and expertise based on our experiences. For example, learning a piano at an early age can help one become an expert. Core competencies can be innate, acquired or both.

How wide is a circle of competency?

Charlie Munger took the concept one step further by playing the strengths to have a competitive advantage. If a person not playing to their strengths comes up against a person who is, they will most likely lose. Charlie Munger on the boundaries of circle of competency:

If you have competence, you pretty much know its boundaries already. To ask the question (of whether you are past the boundary) is to answer it.

You have to figure out what your own aptitudes are. If you play games where other people have the aptitudes and you don’t, you’re going to lose. And that’s as close to certain as any prediction that you can make. You have to figure out where you’ve got an edge. And you’ve got to play within your own circle of competence. If you want to be the best tennis player in the world, you may start out trying and soon find out that it’s hopeless—that other people blow right by you. However, if you want to become the best plumbing contractor in Bemidji, that is probably doable by two-thirds of you. It takes a will. It takes the intelligence. But after a while, you’d gradually know all about the plumbing business in Bemidji and master the art. That is an attainable objective, given enough discipline. And people who could never win a chess tournament or stand in center court in a respectable tennis tournament can rise quite high in life by slowly developing a circle of competence—which results partly from what they were born with and partly from what they slowly develop through work.

How to widen a circle of competency?

Widening your circle of competencies can be done in many ways. Ask questions. Learn. Read. Work for someone who you can accumulate experiences from. Learn by doing. If something falls outside of your competency, delegate or outsource.

In my whole life, I have known no wise people (over a broad subject area) who didn’t read all the time – none, zero. You’d be amazed at how much Warren Buffett reads – and how much I read. My children laugh at me. They think I’m a book with a couple of legs sticking out.

There is a difference between real knowledge and surface knowledge. Richard Feynman distinguished knowing the name of something vs knowing something.

Real knowledge comes from doing deep work, experimenting and experiencing. Pretending to know outside of your circle can have real consequences. It serves well when you can say, ”I don't know.” Confidence and humility are equally important.

Why should you avoid jumping from one circle to another?

It is natural to step outside and explore outside of our core circles. We have been doing this ever since the humanity started. However, attempting to broaden the circles should be done deliberately. Skills from one industry to another are not easily transferable. For example, an engineer cannot wake up tomorrow and start conducting surgeries. Not all stories turned out to be successful amongst the most successful icons we know today.

Charlie Munger on avoiding things he does not understand:

Why should I buy something that I don't understand?

I think about things where I have an advantage over other people. I don’t play in a game where the other people are wise and I’m stupid. I look for a place where I’m wise and they’re stupid. You have to know the edge of your own competency. I’m very good at knowing when I can’t handle something.

This is not to say DO NOT jump outside of your circle. Should you expand your skills?

It takes a very long time to build meaningful skills. If you are deliberate about committing to learning something new for a long period of time, it will be a worthwhile exercise to cross over the edges of your core competencies. But don't catapult yourself hundred miles outside of your circle. You will fall flat on your face. To be a life-longer is a competitive advantage. Not everyone is born with natural talents, but skills can be acquired over time.

The competencies don't extend to just only skills or abilities, but also physicality. For both swimming and running, you need long legs, but that is not enough. A long torso is ideal for moving through water, but a short torso is important for long-distance running. If a swimmer and a runner have identical lengths of legs doesn't mean they can equally compete against each other by jumping from one sport to another.

Another common case against professional athletes is financial missteps. Going through financial stress seems to be common after departing a professional league. If only they knew about the circle of competencies, many of them could avoid financial downfall.

Be wary of investing in areas you have no knowledge in. First step of investing is understanding businesses you will invest in. The second step is to wait patiently for misprized bets of the businesses you understand. Investing does not mean swinging at every pitch. Buffett and Munger stuck around for the right pitches which led to acquiring about $700 billion of assets.

When investing, risks along with profits should be taken into consideration. Seth Klarman’s letter to his investors shortly after the Financial Crisis of 2008:

Nowhere does it say that investors should strive to make every last dollar of potential profit; consideration of risk must never take a backseat to return.

Understanding core competencies of your pool of employees can help what can and cannot be executed as a team. Then delegation becomes manageable.

Businesses need to operate within their core circle of competencies. For example, acquiring a company that specializes in janitorial services or property management has nothing to do with an accounting business.

Taking jobs in areas that we don't know enough about can be a nightmare for everyone involved.