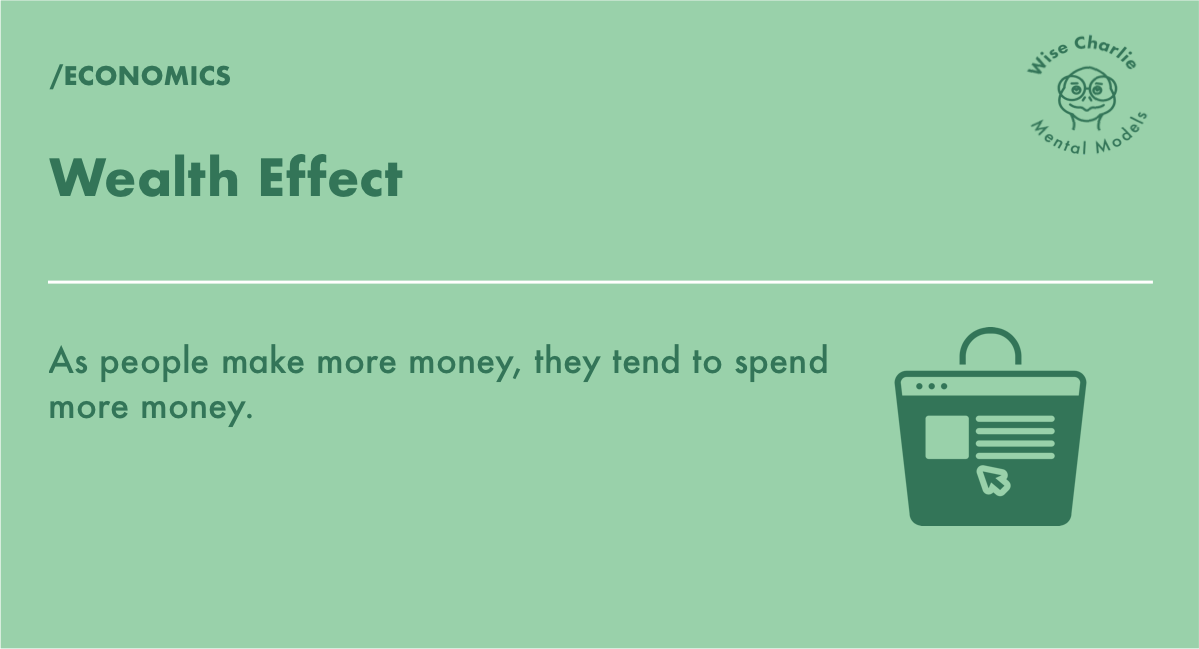 Scenario 1: Harry had been a metal detectorist for 14 years. He had never found anything. Today was his lucky day—a stash of gold coins. He took them to the local museum. Initially, he was going to spend his bounty on a car, a boat, a plane, an island, and a maybe new pair of socks. But, as it turned out, they were only chocolate coins. While not legal tender, they tasted nice, even though they'd been buried for years.

Scenario 2: Robert has been working for years to earn his latest promotion, and now that it’s come, his life is going to change. A manager doesn’t eat from paper plates using plastic cutlery, nor do they keep mugs stolen from the local diner as their primary drinking glasses. Robert understands that he will have to upgrade his lifestyle, and now that he’s a man of greater status, his kitchenware will be the first thing to change.

At least, that’s what the wealth effect theory states.

This behavioral economic theory suggests that as the value of a person’s assets rises, so does their rate of spending.

This theory relies on the idea that consumers who earn more will feel more financially secure and confident about their wealth. As they begin to feel richer, the guilt associated with irresponsible spending often fades.

There are two other effects that relate to the wealth effect; the income effect and the substitution effect.

The income effect defines any change in the consumption of goods based on income and it can be expressed either directly or indirectly.

When a consumer replaces cheap items with more expensive ones after experiencing a change in finances, they are acting out the substitution effect.

Understanding the wealth effect has helped generations of consumers monitor and moderate their own spending.

According to QZ, an online publication, only about 30% of Americans owned any form of stock in 1990. As of 2020, more than 50% now own stock. The 50% who don’t own stock are typically low-income Americans who don’t have access to retirement accounts.

With approximately half of the population holding stock, it’s apparent that local economies may be sensitive to stock market performance. The National Bureau of Economic research argued this point in a paper published in 2019.

Their research found that for every dollar of stock market wealth created, people spend 2.8 cents more per year. When this model is applied at the grand economic scale, it’s apparent that the wealth effect can predict higher wages and lower unemployment in a population.

Events in 1968 highlight a real-world example of the wealth effect in action. The stock market entered a bull run, causing a massive rise in wealth amongst several specific categories of people. At the time, taxes were hiked by an additional 10%, yet people continued spending more in spite of this. Consumers were making more money due to the growth of the stock market, so the additional tax burden wasn’t of enough significance to impact their spending habits.

Increased spending has also been linked to higher home values. Karl Case and Robert Shiller, the developers of the Case-Shiller home price indices, collaborated with John Quigley to research the wealth effect from 1982 to 1999. Their findings showed ‘weak’ evidence that variations in housing market wealth have important effects upon consumption.

You can read more about their research in a paper titled “Comparing wealth effects: the Stock Market versus the Housing Market.”

The study was later expanded to observe a 37-year period from 1975 to the second quarter of 2012.

The results of this expanded data set revealed that an increase in housing wealth would boost household spending by around 4.3% over the course of four years. Likewise, a drop such as the fall in housing wealth caused by the crash between 2005 and 2009 would cause a spending drop of approximately 3.5%.

The wealth effect reflects the effect that rising wealth has on consumer confidence. Consumer confidence is the feeling of security that consumers feel when the value of their investments grows. Quite often, a boost in confidence leads to higher spending and less saving.

Many economists believe that housing wealth does indeed encourage extra spending, but there are some who dispute this theory, claiming that previous research on the subject has been overstated.

Some critics even claim that increased asset wealth shouldn’t have as much impact on consumer spending as other factors, like taxes, household expenses, and employment trends.

This argument is founded upon an assumption that an increase in the value of an investor’s portfolio doesn’t necessarily equate to an increase in disposable income.

A change to one’s circumstances shouldn’t always change their consumption patterns, but the substitution effect shows that the inverse occurs quite commonly.

The income effect in practice

When a consumer changes the way they spend because their income has changed, that would be a direct impact of the income effect. Indirect income effect would look like someone changing magazine subscriptions because they’ve recently gotten too old to read anything with “Teen” in the title.

In this instance, your income has nothing to do with your decision. Rather, the decision is driven purely by a change in your literary tastes.

The substitution effect in practice

An example of the substitution effect can be found in a situation where someone’s business grows quickly, so they decide to upgrade systems that were already updated recently. The additional purchase isn’t necessary, but the negative consequences are disregarded due to the additional income that’s available.

The wealth effect, and income effect, could be seen in businesses that experience a period of high profits, then use their increased revenue to expand into new locations. With more wealth on hand, business leaders are typically more comfortable spending on important resources like labor, production, and marketing.

When companies outsource their operations to an outside organization, they are applying the substitution effect. Because they can get the same work done at a lower cost or in a shorter time using an outside provider, they substitute in a more effective solution.

When one feels they have accumulated significant knowledge, they are more likely to pursue riskier educational pursuits. They have a wealth of knowledge, therefore it is no issue to spend time learning a difficult subject.