Tragedy of the Commons 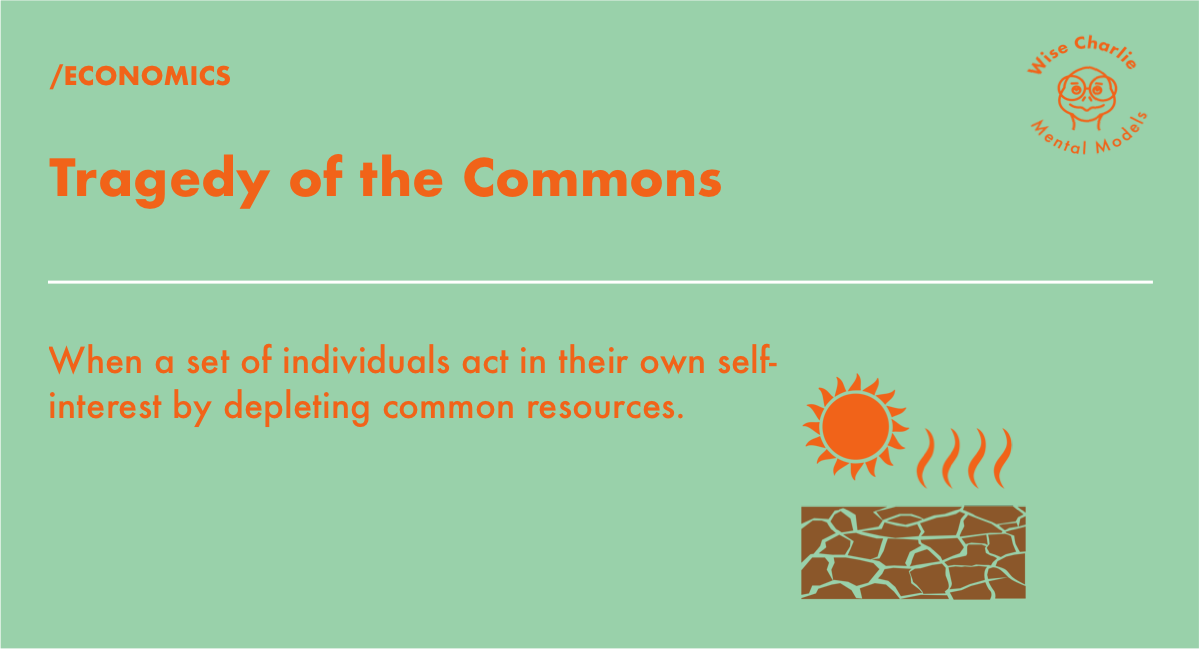 When a set of individuals act in their own self-interest by depleting common resources.

Scenario 1: Fisheries provide the classic example of the tragedy of the commons. Fishing too much for seafood leads to depletion of fishes from our ocean.

Scenario 2: The tragedy happens when flocks of sheep herd on a common land, it depletes the quality of a common land.

The 'tragedy' refers to a set of individuals who, acting rationally, independently, and in their own self-interest can create a situation where they destroy a group’s collective long-term viability by depleting a common source. Fishing and herding are classic examples.

The theory was originated in 1833 by the British economist William Forster Llyoyd in his essay, who used a hypothetical example of the effects of unregulated grazing on common land in Great Britain and Ireland. The concept became widely known as the "tragedy of the commons" over a century later due to an article written by American biologist and philosopher Garrett Hardin in 1968.

In our modern economic times, "commons" means any shared and unregulated resource such as atmosphere, oceans, rivers, fish stocks, roads and highways, or even an office refrigerator.

The term is used in environmental science. The "tragedy of the commons" is often cited in connection with sustainable development, meshing economic growth and environmental protection, as well as in the debate over global warming. It has also been used in analyzing behavior in the fields of economics, evolutionary psychology, anthropology, game theory, politics, taxation and sociology.

Hardin wrote "The Tragedy of the Commons" in 1968, at the height of the Cold War and U.S. arms race with the Union of Soviet Socialist Republics ( USSR) for domination through lethal weapons. Technology got the countries into the situation, and Hardin believes relying on more technology will only make the situation deadlier. He opens the essay with an appeal to look for alternate kinds of solutions to other problems as well.

Hardin is opposed to shared resources being available for every member to use without limit. He believes a resource can only be shared when the user population is small and use is low.

The Declaration of Human Rights was adopted in the aftermath of the atrocities of World War II. It states a person is entitled to an adequate standard of living, "including food, clothing, housing and medical care and necessary social services, and the right to security in the event of unemployment, sickness, disability, widowhood, old age or other lack of livelihood in circumstances beyond his control." It also states each individual has the right to decide how many children to have.

Hardin objects to the declaration because it sanctifies the rights of families to make their own decisions outside state control and supports the creation of a welfare state.

Hardin objects to the welfare state, where society or government provides food, shelter, and social services to the needy. In Hardin's view these entitlements protect people from the negative consequences of their own actions, especially in regard to having children they can't afford. The society is left responsible for providing for their children.

Hardin favors private ownership, which protects a resource from overuse. Since it is not a commons, it is protected from being overrun and exploited by others. However, Hardin admits a property owner or inheritor can also squander the resource or use it irresponsibility.

According to Hardin, the earth's oceans and all they hold are viewed as an unlimited commodity to be exploited. For millennia fish were caught in small enough numbers, but in modern times demand for seafood has made fishing a profitable industry. This has led to overfishing and the near extinction of whales and other sea life.

In The Wealth of Nations (1776), economist Adam Smith developed the idea individuals making rational choices on their own behalf ultimately benefiting society. Someone who "intends only his own gain," Smith argued, is "led by an invisible hand to promote ... the public interest." Competition forces individuals and businesses to continually make their products more attractive in price or function. As a result, products keep improving. Society benefits and the economy grows.

Garret Hardin revised the theory later to account for "managed" in addressing to fix the tragedy of the commons. That is done when regulations, tax and public policies are in place to effectively manage the common resources.

A ‘managed commons’ describes either socialism or the privatism of free enterprise. Either one may work; either one may fail: ‘The devil is in the details.’ But with an unmanaged commons, you can forget about the devil: As overuse of resources reduces carrying capacity, ruin is inevitable.”

The government can solve the tragedy of the commons in two ways.

Singapore is the 3rd most densely populated country in the world. Roads are limited. If everyone uses the car, traffic becomes the problem. So, government made driving license very expensive. Second, if cars are driven during peak traffic, the toll would cost more. Singapore's government discouraged driving and aligned incentives for people to behave accordingly. People started using public transportation for their commute and this in turn helped to resolve the tragedy of the commons.

What is common to many is taken least care of, for all men have greater regard for what is their own than for what they possess in common with others. — Aristotle

The oceans of the world continue to suffer from ... the philosophy of the commons. — Garrett Hardin