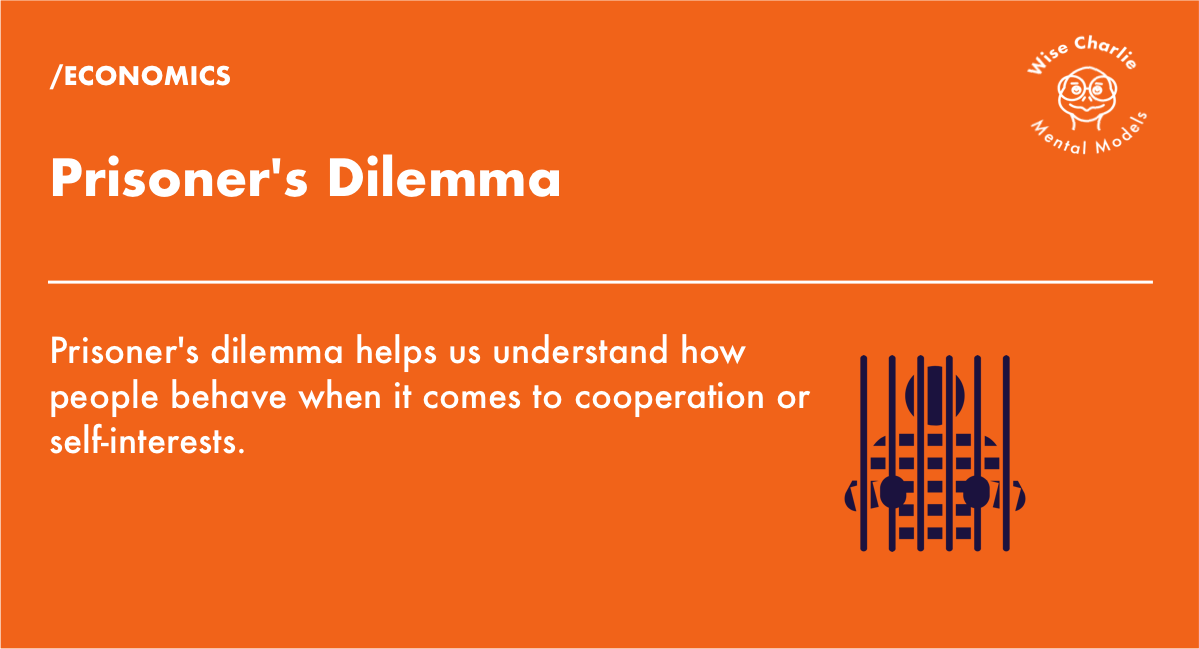 Prisoner's dilemma helps us understand how people behave when it comes to cooperation or acting in their own self-interests.

Scenario 1: Imagine two prisoners caught by a police. If they both confess, they each get 2 years in prison. If neither of them confesses, they each get 1 year. If one prisoner confesses and the other does not, the confessor goes free and the other gets 3 years. Neither prisoner knows whether the other has confessed because they cannot communicate with one another. Therefore, it is in the self-interest of each to confess. When each prisoner pursues his or her self-interest, both end up worse off than if they would have cooperated.

Scenario 2: Arms races between powerful nations is another scenario of prisoner's dilemma. Powerful nations like US, China and Russia keep manufacturing weapons. However, both countries are better off when they cooperate and avoid an arms race. Yet each nation pursues self-interest of becoming the most powerful nation.

A game in which two separate prisoners are given two choices: confess or don't confess. The prisoner's dilemma is a paradox in decision analysis in which two individuals acting in their own self-interests do not produce the optimal outcome. The typical prisoner's dilemma is set up in such a way that both parties choose to protect themselves at the expense of the other participant. As a result, both participants find themselves in a worse state than if they would have cooperated with each other. The highest reward for the prisoner occurs when both parties choose to co-operate.

It was originally framed by Merrill Flood and Melvin Dresher while working at Rand Corporation (RAND) in 1950. Albert W. Tucker, an American mathematician formalized the game with prison sentence rewards and named it “prisoner's dilemma.” The title “prisoner's dilemma” and the version with prison sentences as payoffs are due to Albert Tucker, who wanted to make Flood and Dresher's ideas more accessible to an audience of Stanford psychologists.

The prisoner's dilemma is one of the most well-known concepts of game theory.

What is a Game Theory?

Game theory is the logical analysis of game (situation) of conflict and cooperation when there are at least two players (parties) involved. Each player takes courses of action to determine the outcome of a game. Game theory is the study of how players should rationally play games. Each player would like the game to end in an outcome which gives him or her as large a payoff as possible.

The Dilemma of Prisoners

Prisoner's dilemma is a classic example of game theory. The prisoner's dilemma is the best-known game of strategy in social science. It helps us understand what governs the balance between cooperation and competition (self-interest) within people, companies (business), nations (politics) or even biological species (social environment). Will the so called ”prisoners” choose to betray, confess or remain silent?

In the prisoner’s dilemma the Nash equilibrium is for both prisoners to confess since neither prisoner will then have the unilateral ability to increase their outcome. A Nash equilibrium is reached when the choices of all players leads to a situation in which there is no other choice that makes any other player better off. In other words, cooperate with one another to reach the optimal outcome. However, the rational choices are never made.

So, this begs the following question? Can we teach players (prisoners) to make rational decisions?

Escape from the Prisoner's Dilemma

Over time, players can learn to overcome individual incentives in favor of common good by repeatedly playing the game. For every iteration, players get rewarded for co-operation and punished for self-interest. Players then would learn that they do best when both act unselfishly and cooperate.

If one player failed to cooperate in one game, the other player could retaliate by not cooperating in the next game, and both would lose until they would cooperated again.

When the game is repeated a fixed number of times, however, this argument fails.

To see the argument mentioned above, take two businesses competing for 10 days before Christmas. Both players maintain fair prices because if one doesn't, the competitor will retaliate next day. However, on the last day, one player decides not to honor fair prices and the competitor loses out because the next day people are no longer shopping and busy spending time with their family on Christmas Day. Knowing this, the business losing out has no incentive to offer fair prices. It is a fair conclusion to make rational business will engage in a price war every day since both player knows the game being played fixed number of times.

Over the years, we had the option of making large capital expenditures in the textile operation that would have allowed us to somewhat reduce variable costs. Each proposal to do so looked like an immediate winner. Measured by standard return-on-investment tests, in fact, these proposals usually promised greater economic benefits than would have resulted from comparable expenditures in our highly-profitable candy and newspaper businesses. But the promised benefits from these textile investments were illusory. Many of our competitors, both domestic and foreign, were stepping up to the same kind of expenditures and, once enough companies did so, their reduced costs became the baseline for reduced prices industry-wide. Viewed individually, each company’s capital investment decision appeared cost-effective and rational; viewed collectively, the decisions neutralized each other and were irrational (just as happens when each person watching a parade decides he can see a little better if he stands on tiptoes). After each round of investment, all the players had more money in the game and returns remained anemic. —Warren Buffett

How a firm interacts with other firms plays an important role in shaping sustainable value creation. Here we not only consider how many companies interact with their competitors, but how companies can co-evolve. Game Theory is one of the best tools to understand interaction. Game Theory forces managers to put themselves in the shoes of other players rather than viewing games solely from their own perspective.The classic two-player example of game theory is the prisoners’ dilemma. —Michael J. Mauboussin