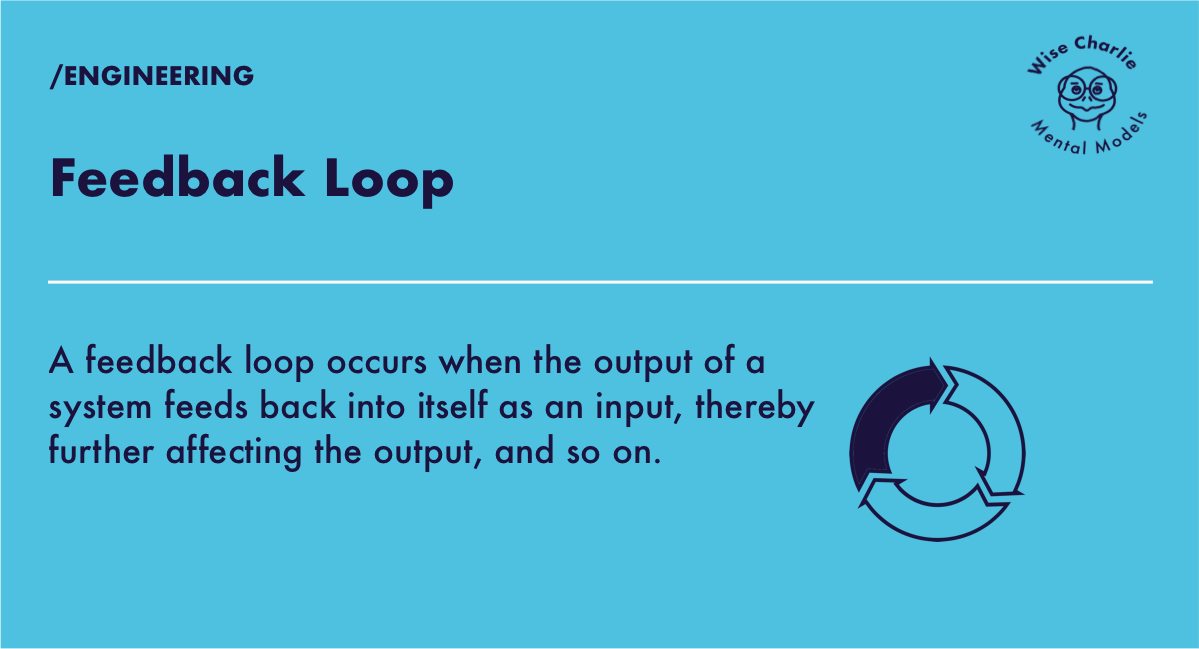 A feedback loop occurs when the output of a system feeds back into itself as an input, thereby further affecting the output, and so on.

Scenario 1: usually during recession due to negative news, small number of depositors think banks are going broke, so they will run to local branches to withdraw their money. This leads to neighbors and friends flocking to the banks to withdraw more money. This results in bank runs causing ripple effect.

Part of a control system in which the outputs are fed back in as inputs. Take the heating in your home: your furnace will push out heat, the thermostat will check the temperature and use this information to turn the furnace on and off. The system is a loop. The concept is also known as homeostasis in biological field.

The concept first started to appear in Britain but it didn't have a name. One of the first artificial feedback device was a mercury thermostat to regulate temperature of a chicken incubator in 1620 in England. It was built upon a similar device called thermoscope invented by Galileo in 1593. Feedback loops were applied to windmills, steam-engines, electronic amplifiers, circuits and many other well known inventions.

"On governors" written by James Clerk Maxwell in 1868 is widely considered a classic in feedback control theory. This was a landmark paper for more theories to evolve in the discipline of mathematics of feedback and control theory.

Feedback loops are important if we want to alter a state or fill in a gap in systems. Feedback often refer to as information about the state or a gap but can be useless unless translated into an action.

Here is the definition from Wikipedia:

Feedback occurs when outputs of a system are routed back as inputs as part of a chain of cause-and-effect that forms a circuit or loop. The system can then be said to feed back into itself. The notion of cause-and-effect has to be handled carefully when applied to feedback systems: Simple causal reasoning about a feedback system is difficult because the first system influences the second and second system influences the first, leading to a circular argument. This makes reasoning based upon cause and effect tricky, and it is necessary to analyze the system as a whole. — Karl Johan Åström and Richard M. Murray, Feedback Systems: An Introduction for Scientists and Engineers

We might think if the output becomes the input, then the next output should be of higher intensity than the previous one. But that is not the case because there are two types of feedback loops — positive (reinforcing) and negative (balancing or goal-based) feedback loops.

The key difference between positive and negative feedback is their response to change.

Biological systems operate on a mechanism of inputs and outputs, each caused by and causing a certain event. Feedback loops are important because they allow living organisms to maintain homeostasis. Homeostasis is the mechanism that enables us to keep our internal environment relatively constant – not too hot, or too cold, not too hungry or tired.

Positive feedback loops are effective for creating change, but generally result in negative consequences if not moderated by negative feedback loops. Many internet companies are the beneficiaries of positive feedback loops which help create the “network effect.” The more people that use a particular search engine or social network, the more honed the search results become, or the more useful the network becomes to the user. That’s one of the reasons why search networks are a “winner take all,” type of business model. These feedback loops will continue to reinforce themselves until regulators or anti-trust officials take action.

Feedback loops are important for virtuous cycle of deep and experimental learning. As we learn, try and practice a topic, we can get feedback on our performance (tests). Based on the feedback, we evaluate which methods of learning are most efficient and which aren't. Then we modify our behavior and adjust our learning methods. This loop reinforces our learning, and helps us to improve. As we learn more, we will be able to understand higher-degree ideas, and this snowballs into a huge intellectual advantage over time.

A powerful application of the feedback loop is the habit loop, as popularized by Charles Duhigg. The habit loop explains how we can use feedback (rewards) to reinforce the behavior we want to create within ourselves.

A key point to remember is that feedback is most effective when provided immediately and translated into an action otherwise feedback is no good. There are many other known applications of feedback loops here.