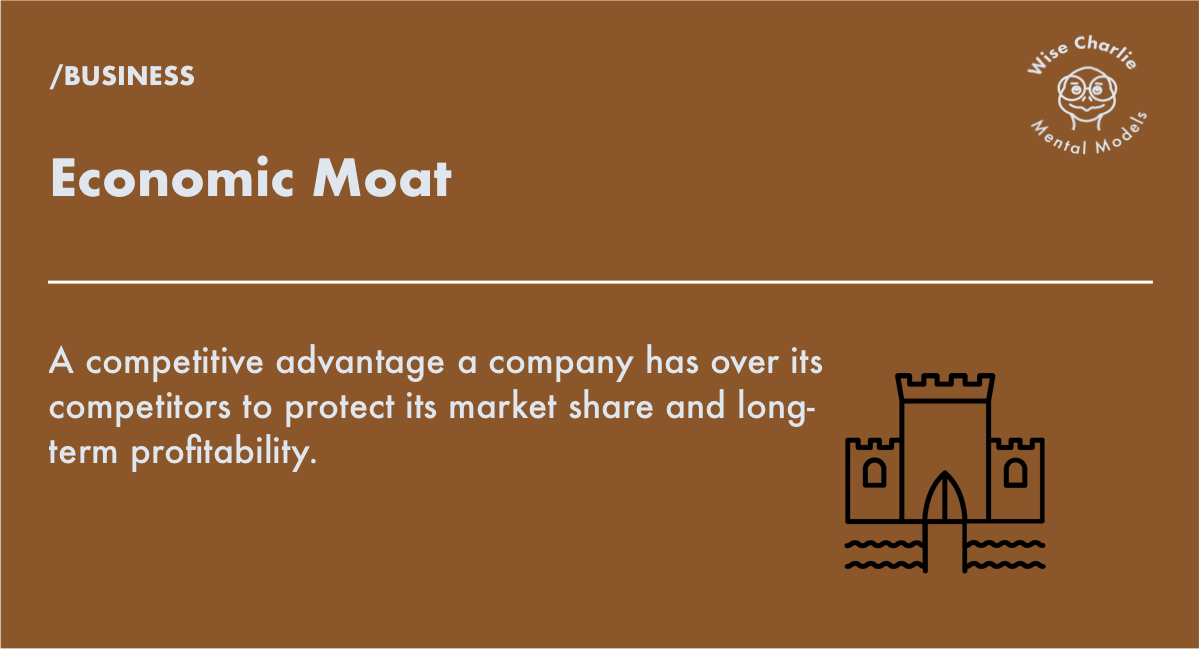 A competitive advantage a company has over its competitors to protect its market share and long-term profitability.

Scenario 1: A company has a moat when it has a valuable network effect. Twitter has a network effect because its members enjoy the benefit of connecting with more people. As Twitter network grows larger, there is more incentive for people to join.

Scenario 2: Imagine the process of switching banks and updating all of your billing accounts. It is inconvenient for customers because they have to bear the switching costs. Higher switching costs provide banks an economic moat.

The ability of a business to protect itself and create long-term competitive advantages. Companies such as Walmart can undercut competitors and negotiate supplier discounts due to a high volume of sales.

Warren Buffett, one of the greatest investors of our time conceptualized the term.

The illustration of moats is derived from water-filled moats that surrounded medieval castles. Water acted as a moat to protect kingdoms and castles from invaders.

Understanding economic moat is crucial to survival for any business. It describes a company's ability to earn above-average profits for a long period of time.

No moat businesses often face threats from invaders, also known as competitors. Rapid innovation in technology has prevented businesses to protect its moat.

Wide moat businesses benefit from one or several factors but they are also able to generate above-average profits for a long period of time. This profit can either be reinvested back into a business (Amazon) or return excess cash back to investors (Apple).

Wide moat businesses require competent management with excellent capital allocation skills. For every decision being made there is an opportunity cost. Reinvesting excess cash can be risky and investors would have to hold off for a payout. But great capital allocators see opportunities where others don't, turning a company into a size of many folds. Jeff Bezos of Amazon is a great example of an efficient capital allocator.

Technology has made switching costs easy for customers due to better product integration. It is easy for customers to download their old data and import it on a new software. Be careful how these factors are evolving with rapid technology innovation. Old economic moats are still sound but are evolving with time. Walmart is a wide moat business but Amazon was able to eat its lunch by bringing unlimited shelf space using web technologies.

Strong moats survive major platform or trend shifts, but surviving should not be confused with thriving. IBM has survived major technological shifts, but is struggling to thrive. It is a victim of its own success because it failed to recognize industry wide transformations.

The major key takeaway of moat — is the end state defensible? If not, why go there?

Our criterion of “enduring” causes us to rule out companies in industries prone to rapid and continuous change. Though capitalism’s “creative destruction” is highly beneficial for society, it precludes investment certainty. A moat that must be continuously rebuilt will eventually be no moat at all. — Warren Buffett

Unless a company has an economic moat protecting its business, competition will soon arrive on its doorstep and eat away at its profits. Wall Street is littered with the dead husks of companies that went from hero to zero in a heartbeat. — Pat Dorsey

How do you compete against a true fanatic? You can only try to build the best possible moat and continuously attempt to widen it. — Charlie Munger

In business, I look for economic castles protected by unbreachable 'moats'. — Warren Buffett

No formula in finance tells you that the moat is 28 feet wide and 16 feet deep. That's what drives the academics crazy. They can compute standard deviations and betas, but they can't understand moats. — Warren Buffett