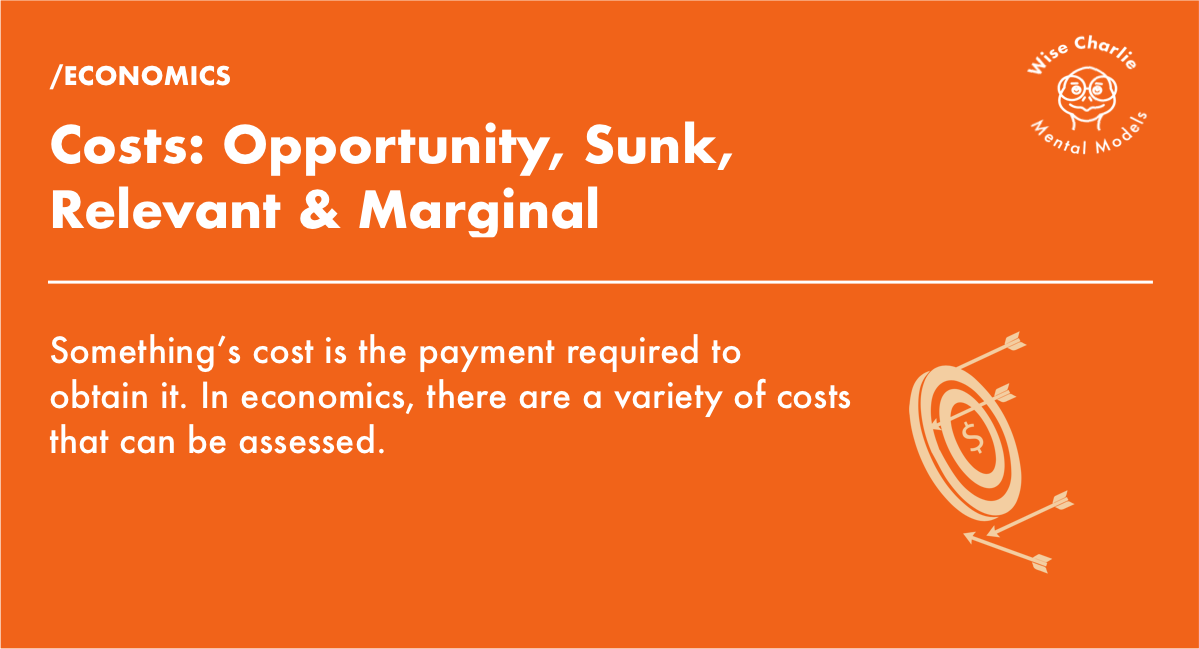 Something’s cost is the payment required to obtain it. In economics, there are a variety of costs that can be assessed.

Scenario 1: Dwight looked in the mirror and considered the opportunity cost of buying a new pair of socks.

He had tracked the sunk costs; there were none. But there were relevant costs to consider.

Fortunately, the marginal cost was irrelevant. So today was the day he would buy a new pair of socks.

Scenario 2: Little Billy wanted ice cream, but his savings had run dry. Had he not bought ice cream yesterday, he’d have the money he needed to buy more. Once he finishes this week’s chores, he should have just enough to buy another ice cream that weekend. After weighing the costs, Billy decided to go home and do his chores now. He couldn’t just leave that ice cream cone waiting.

If assets have already been spent, and cannot be recovered, the sum of those assets is defined as your sunk cost. Sunk costs are generally excluded from future business decisions because costs typically remain the same regardless of related outcomes.

Relevant costs describe avoidable costs that are only incurred due to specific decisions made at an individual or organizational level. Relevant cost structures exist to exclude unnecessary data from the decision-making process. The relevant cost is effectively the opposite of the sunk cost.

Marginal costs are any costs associated with increasing production to create one additional unit. The marginal cost can be used to determine how much must be spent in order to reach a specific production goal.

A classic example of sunk costs occurred with the Concorde. British and French manufacturers poured extensive sums of money into developing the Concorde aircraft over the 1950s and 1960s, resulting in a massive sunk cost. After decades of availability, the aircraft never managed to become financially profitable. This notorious incident led to the sunk-cost fallacy sometimes being referred to as the Concorde fallacy.

Costs have been assessed since the dawn of industriousness. In order to make the most rewarding decisions, people consider the costs associated with their actions. In doing so, they mold their mental models to suit the environment that surrounds them.

If you found yourself interested in pursuing a career in the arts but instead chose to join the military due to family pressure, there would be an opportunity cost associated with this decision. While you may complete your military service having learned a range of new and useful skills, you won’t have made much direct progress towards your goal of a career in the arts.

To some, this opportunity cost may be worthwhile, as their military experience could offer the financial security needed to support a career in the arts. Joining the military may even allow you to attend art school, meaning you can attain some progress toward your ultimate goal.

While there may be some opportunity costs associated with joining the military, the sunk cost is a bare minimum of 4 years of contracted service time. During this time, your actions will be restricted and you will have significantly more responsibilities. All of this should be calculated into the sunk cost as well.

Then, consider the relevant cost. What exactly are you giving up by joining the military, and what are you gaining.

The cost of joining the military early on is lower than joining later, as once you complete your service you will still have the rest of your life to pursue other interests. If you wait until you are 30 to join, you may not have the same opportunities as younger soldiers, meaning the sunk and relevant costs will all be skewed out of your favor.

The sunk cost is likely to be the most impactful of costs, as this is what cannot be recouped, regardless of the decisions you make during your time.

This passage elaborates on the issues involved with sunk costs.

There's also the matter of sunk costs, which are probably the least intuitive and least discussed of the three concepts. Essentially, the pandemic has forced consumers and firms to incur costs they otherwise would not have; for instance, purchasing home office equipment to facilitate remote working. Once the pandemic is over, the impetus for the purchase decision will have disappeared, but people will still have the home office equipment, so working from home will continue to be marginally more attractive. Sunk costs can also come in other, non-monetary forms, like time. Consider that the surge in working from home has required extensive time on the part of managers, as they've needed to craft work-from-home capabilities, such as drawing up policies and learning the best ways to communicate with remote workers. This may not have been considered a valuable use of their time before the pandemic, but now that firms have been forced to incur this cost, the issue is no longer relevant, and the necessary work-from-home systems are in place.

The ‘sunk cost fallacy’ suggests that people will irrationally continue poor behavior only because they’ve already incurred the cost previously.

Someone who is already 50% done with a failing project will be less likely to give up on the project than someone who has only completed 10%. The person who has completed 50% of the project has a large sunk cost associated with the project, so it is harder to step away. Relevant costs aside, it’s much easier for someone with a minimal investment to step away from a project.

In the previous example, the sunk cost fallacy would likely keep the person who was halfway done with the project working on it much longer than is reasonable.

This only makes the problem worse.

Thomas Jefferson illuminates this troublesome reality in a quote,

Pride costs us more than hunger, thirst, and cold.

Malcolm Turnbull also put it finely when he said,

In economics, one of the most important concepts is 'opportunity cost' - the idea that once you spend your money on something, you can't spend it again on something else.

In business, you must make expenditures wisely, while always keeping your eyes open for more fortunate opportunities. While you may have the assets needed to pursue one opportunity, it may not be wise to if doing so will cost you the next valued opportunity.

The earlier example doesn’t offer the best context to elaborate on marginal costs, so we will discuss it here in a separate section.

Your marginal costs include any costs associated with increasing production by one unit. The context wherein marginal costs are relevant often involves business operations. The easiest example to use to display marginal cost would be this:

Make vs. buy decisions are a common issue faced by companies the require component parts to create a final product. The relevant cost of making those components themselves or buying them from a 3rd party vendor is what must be weighed in order to make an effective decision.

If a retail chain has a business unit that isn’t operating as well as expected, the leadership must decide whether to continue operating or close the unit. The relevant costs involved in this decision would be any costs that are eliminated due to the closure, and any revenue lost once the stores are inactive. If the costs being eliminated exceed the revenue lost, the business unit should be closed.

If you have a job, you won’t be able to work more than one or two other jobs.

But most people don’t consider the cost of maintaining a single job and not looking for new opportunities. The sunk cost of working in a single place for a long time shouldn’t prevent you from seeking higher-paying jobs with more responsibilities.

If you consider the relevant costs, it makes sense to continue seeking higher-paying, more satisfying work until you’ve reached a point where you are content with your income and workload.