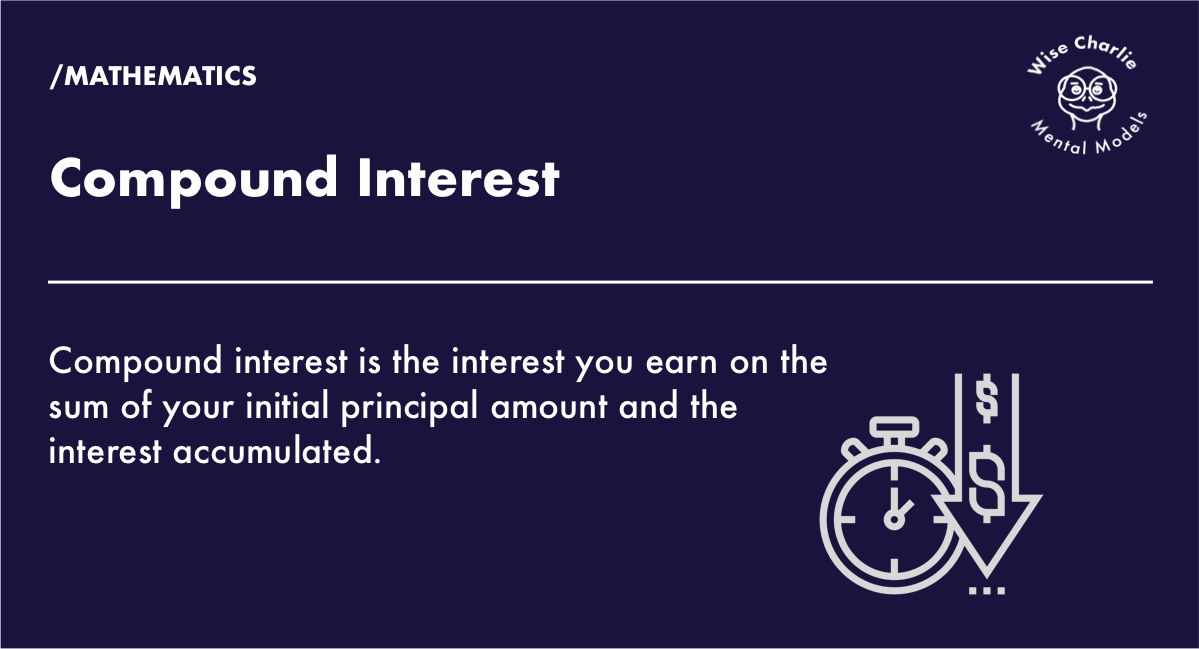 Compound interest is the interest you earn on the sum of your initial principal amount and the interest accumulated. In other words, interest on interest.

Scenario 2: Charlie and Charleigh decided to play snowball during a snow-day. Charlie stood on top of the hill to roll a snowball down a snow-covered hillside. The size of the snowball was very tiny in size. As the ball was rolled over, it picked up more snow, gaining in more mass and surface area. The snowball grew larger in size with momentum as it rolled along. Charleigh on the receiving end got so scared by the massive size of the snowball that she started running away in the other direction. That is one way to make friends. Cough, cough...Charlie!

It is the result of reinvesting interest, rather than paying it out, so that interest in the next period is then earned on the principal sum plus previously accumulated interest. Compound interest is standard in finance and economics.

Think of it as a snowball effect. Snowball rolling down the hill, accumulating more snow and gaining in size. Snow keeps compounding as it accelerates downwards.

Compound interest was once regarded as immoral and condemned by Roman law. In 1340, the Florentine merchant and politician, Franceso Balducci Pegolotti provided a table of compound interest in his book Pratica della mercatura of about 1340. It gives the interest on 100 lire, for rates ranging from 1% to 8%, for up to 20 years.

In 1613, a London mathematical practitioner, Richard Witt published a book Arithmeticall Questions which was wholly devoted to the subject of compound interest.

Jacob Bernoulli, a famous mathematician, discovered the constant e in 1683 by studying the exponential series which came out of examining compound interest.

What else compounds other than money and mathematical equations?

Compound interest is well known in the field of modern finance but money is not the only thing that compounds. The power of compounding applies far beyond the realms of finance. Knowledge, relationships, marketing, sales or ideas are all compoundable. Even in sports. Score built on momentum can compound during the game.

Knowledge compounds rapidly, as you read more, the more connections you can make across different ideas and fields, leading to a prosperous snowball effect. The more you do of something, the more it reinforces.

You often get an advice to make daily improvements because it has long-term effects. That is called compounding, my friend. If you focus on improving 1% on daily basis, after a year, you'll be 37 times better than where you started. It can also have the opposite effect. As you decline 1% on a daily basis, you'll be far worse than where you started.

Compounding take a long time which requires focus and dedication. Therefore, compound interest is an exponential effect rather than a linear effect. We can visualize this by drawing out a hockey stick. Initially, it starts out slow and then it exponentially grows. If you don’t interrupt it, compounding produces a fortune.

Compounding tiny excellence is what creates big excellence. So focus on compounding good habits and drain out the bad habits because focusing on bad habits can compound in the wrong direction and can turn out to be expensive.

Keep in mind, compounding for tangible items can be subjected to physical limits but intangibles can compound exponentially.

Why do stock market outperform bonds?

And then came along a 1924 book--slim and initially unheralded, but destined to move markets as never before--written by a man named Edgar Lawrence Smith. The book, called Common Stocks as Long Term Investments, chronicled a study Smith had done of security price movements in the 56 years ended in 1922. Smith had started off his study with a hypothesis: Stocks would do better in times of inflation, and bonds would do better in times of deflation. It was a perfectly reasonable hypothesis...To report what Edgar Lawrence Smith discovered, I will quote a legendary thinker–John Maynard Keynes, who in 1925 reviewed the book, thereby putting it on the map. In his review, Keynes described “perhaps Mr. Smith’s most important point … and certainly his most novel point. Well-managed industrial companies do not, as a rule, distribute to the shareholders the whole of their earned profits. In good years, if not in all years, they retain a part of their profits and put them back in the business. Thus there is an element of compound interest (Keynes’ italics) operating in favor of a sound industrial investment.”It was that simple. It wasn’t even news. People certainly knew that companies were not paying out 100% of their earnings. But investors hadn’t thought through the implications of the point. Here, though, was this guy Smith saying, “Why do stocks typically outperform bonds? A major reason is that businesses retain earnings, with these going on to generate still more earnings–and dividends, too.”—Warren Buffett

The rule of 72 calculates the approximate time over which an investment will double at a given rate of return. 72 can be divided by the interest (72/I) to find out time it would take to double the initial amount. It can only be used for annual compounding.

Compound interest is the eighth wonder of the world. He who understands it, earns it … he who doesn’t … pays it. ― Albert Einstein

Understanding both the power of compound interest and the difficulty of getting it is the heart and soul of understanding a lot of things. ― Charlie Munger

One of the most important models there is on Earth. ― Charlie Munger

I constantly see people rise in life who are not the smartest, sometimes not even the most diligent, but they are learning machines. They go to bed every night a little wiser than they were when they got up and boy does that help, particularly when you have a long run ahead of you. ― Charlie Munger USC Law Commencement Speech, May 2007

Spend each day trying to be a little wiser than you were when you woke up. Discharge your duties faithfully and well. Systematically you get ahead, but not necessarily in fast spurts. Nevertheless, you build discipline by preparing for fast spurts. Slug it out one inch at a time, day by day. At the end of the day – if you live long enough – most people get what they deserve. ― Charlie Munger

Identify your compounding base (principal).

Compounding takes time and effort so make sure your base is solid. You do not want to compound the castle built on sand. Also, you cannot compound on nothing. You need fundamentals or something basic to work with.

Frequency has a massive effect on compounding. The frequently it compounds, the faster it will grow or decay. The more you iterate, the faster you will you grow. This applies to knowledge, habits or growth.

Compounding starts out slow in the beginning and takes a long time but in the long-term, it can grow exponentially.