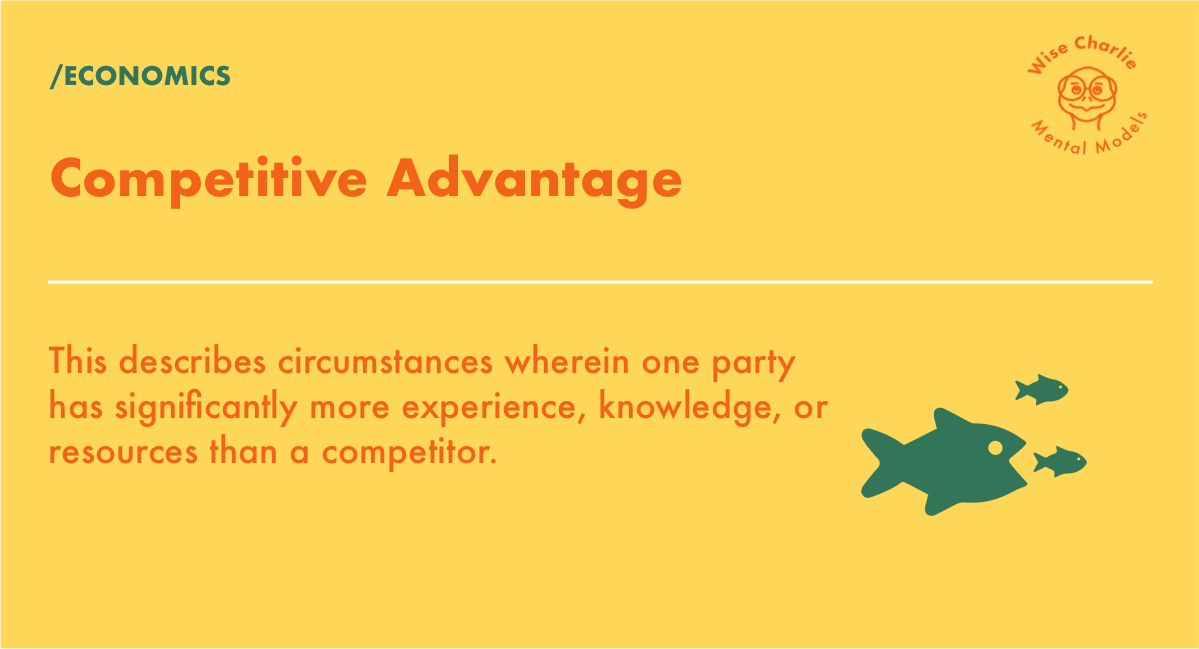 This describes circumstances wherein one party has significantly more experience, knowledge, or resources than a competitor.

Scenario 1: A great empire has won countless wars using military tactics that they have refined over generations. When confronted by an enemy that has access to more advanced technology than them, they tap into the reservoir of knowledge they’ve gained from centuries of battle to create an innovative solution that can overcome their enemy’s advanced weaponry.

Scenario 2: A child challenges his father to a game, expecting to win easily. His father has never played the game, so one would think his chances of success are slim. Yet, once the game starts, the father scores immediately. It quickly becomes clear that, while the child may have more experience playing this particular game, his father’s broad general experience offers him an unbalanced advantage.

For example, someone may be highly competent in their field, offering them a significant advantage compared to most of their peers. But that competitive advantage fades into obscurity when that talented person is compared to someone who has more relevant experience and therefore more applicable knowledge.

To maintain a competitive advantage, you must constantly assess your mental models and improve them when possible. By properly organizing your cognitive resources, you can position yourself better in the world and find greater success.

For businesses in most industries during the mid 19th century, the location of your business was critically important. If you opened a bar in the middle of the town’s business district, then your odds of success were much greater. A bar located 25 miles outside of town wouldn’t fare quite nearly as well under typical circumstances.

In those days, opportunities to gain a competitive advantage were rare, and companies that could retain such an advantage for an extended period were unheard of.

When planning your strategy, show a preference for paths that are best suited for someone with your distinct knowledge and resources. Creating a pattern of habits that allow you to navigate that path is the key to maintaining your competitive advantage after acquiring it. Consider this excerpt from a Future War Paper titled Sustaining Competitive Advantage: Mental Models and Organizational Learning for Future Marines:

Structure influences human behavior, and a person’s mental model is a major component of this. “Structure” here means the basic interrelationships that control behavior, including how people make decisions. (Example human structures include family ties, teacher-student interactions, police-to-motorist relations, etc.) Additionally, structure in human systems is subtle, normally implicit and therefore unacknowledged. This hidden substrate channels the possible outcomes of human activity into a predictable range. Achieving awareness of this structure lends the first step in breaking free from predictability and discovering novel solutions that provide power in a given situation. Against a thinking, motivated enemy, avoiding predictability and employing novel solutions confers competitive advantage.

To a certain extent, you can predict the outcomes of events that you have significant knowledge of. Therefore, someone who has a competitive advantage is effectively someone who can see a part of the bigger picture that is not apparent to the rest of the audience. With more information on hand, they are better equipped than their competitors, allowing them the opportunity to achieve greater success at potentially faster speeds than those who contest them.

Competitive advantage can also be developed across the mental model of an entire group.

Few Marines realize they rely on the hidden structure of mental models, and this provides a clue on how to leverage mental models in developing competitive advantage. To develop shared mental models and achieve alignment, the first step is to make them explicit. Revealing this tool of the mind will allow individual Marines and groups of Marines to manipulate them – change them by design –to achieve action that is more effective. To do this, Marines need to build relevant shared mental models explicitly and practice rapid, meaningful organizational learning. Marines could conduct this activity in a scalable manner, from the smallest team to the largest Marine Expeditionary Force. The leader at each level would also lead the construction of the shared mental model and ensure it nests with the shared model developed by his immediate superior. In a similar manner, leaders at each level would remain alert for single- and double-loop learning activities. Marines today practice many of these elements implicitly. The key to sustaining future competitive advantage lies in performing these functions explicitly.

How to develop a competitive advantage

There is no precise method of acquiring a competitive advantage, though, in the realm of business some would suggest that the advantage goes to whoever can provide the greatest value, at the lowest expense.

The teams that work the hardest often tend to win. That is just the reality of professional sports. When players push themselves to their limits in training, they test their boundaries and identify what they can and cannot deal with. This allows them to lean into their competitive advantage as they compete, making it possible to exert less effort than their competitor and still win.