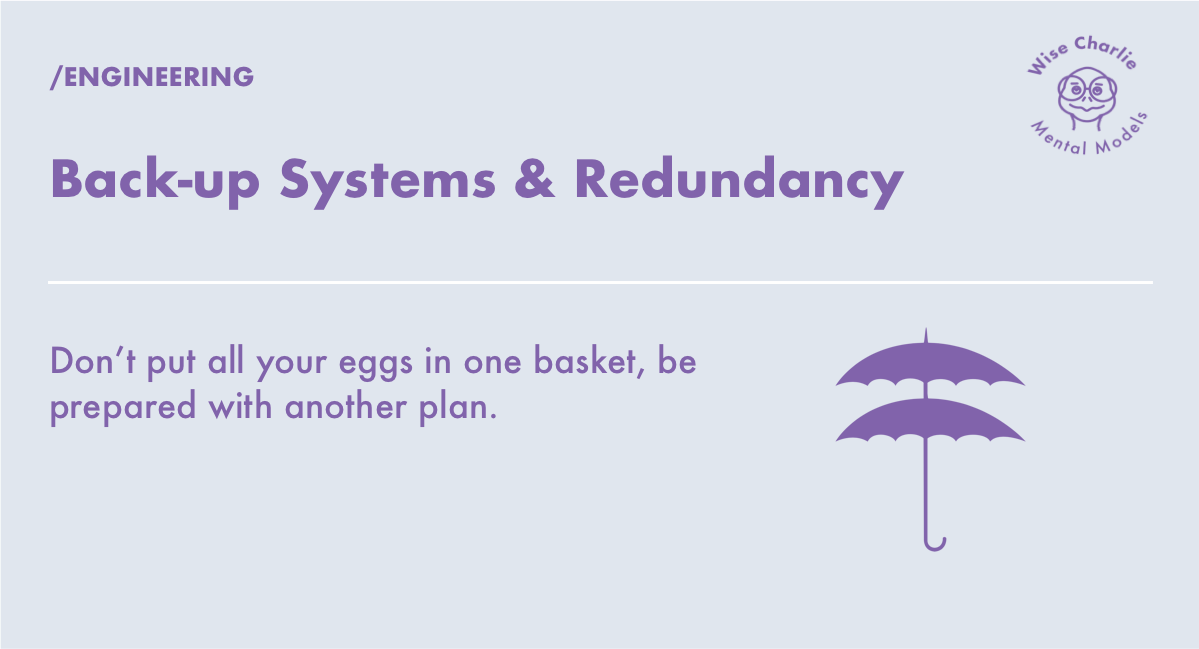 Don’t put all your eggs in one basket, be prepared with another plan.

“She is redundant, Mom. She’s my twin, she has all my backup organs.”

“You know,” said Mom, “We did have twins for a reason. The only problem is I forget which daughter is the real one and which one is the backup.”

Scenario 2: You are on the road heading to work when suddenly you hear a loud pop. This isn’t the first time you’ve had a flat tire and it probably won’t be the last, but thanks to your spare tire, you’ll definitely still make it to work on time.

A situation where there is more than a single means of accomplishing a particular task can be defined as ‘redundancy’.

Creating a redundant system can establish a failsafe that minimizes the consequences of potential errors. A great example of a redundant system is the common practice of keeping a spare house key in a hidden location somewhere on your property.

While you may expect to have your primary key available at most times, on the off chance that you don’t have it ready, you have a redundancy set up to ensure that you can still enter your home.

Spare keys are a very basic example, but redundancy actually refers to a relatively complex concept. To be specific, redundancy is referring to any process that adds additional instances of critical components to a system. If another part of the system fails, these extra components are meant to take over for them.

A system with redundancies set up will not suffer a complete system failure until every instance of critical components fails.

Mental models explore human thought processes, allowing people who use them to learn how something works in the real world. Establishing redundancy as a mental model has been practiced since the dawn of human civilization, as leaders planned infrastructure that would not fail even under the worst circumstances.

Militaries fought with line after line of soldiers. In most cases, the army with the most strategically placed redundancies was bound to taste victory. Strategists who did not think ahead and prepare for the unexpected were outmatched by their forward-thinking peers.

In The Art of War, Sun Tzu states,

Historically, those who used resources efficiently to place redundancies where needed were the most resistant to adverse circumstances.

Redundancy is apparent throughout modern society and all of nature. Systems that work are designed not to fail; therefore they often rely heavily on redundancy.

For example, when traffic lights lose access to adequate power, a redundancy is set up to cause the lights to flash a specific color. While the desired goal of precisely moderating traffic cannot be achieved, this redundancy allows for at least some control over the drivers. While such situations are relatively rare, the redundant system is still important, as it allows municipalities to minimize incidents when power outages do occur.

This example describes a man-made redundant system, but redundancy is abundant in natural systems as well.

This passage from Fooled by Randomness by Nassim Taleb expresses his thoughts on the presence of redundancy in nature:

Mother Nature likes redundancies…the simplest to understand, is defensive redundancy, the insurance type of redundancy that allows you to survive under adversity, thanks to the availability of spare parts. Look at the human body. We have two eyes, two lungs, two kidneys, even two brains – and each has more capacity than needed in ordinary circumstances.

So redundancy equals insurance, and the apparent inefficiencies are associated with the costs of maintaining these spare parts and the energy needed to keep them around in spite of their idleness….Layers of redundancy are the central risk management property of natural systems.

Taleb clearly sees value in the reality that humans have ‘spare parts’ that allow us to survive under adversity, but he doesn’t dismiss the costs of maintaining these additional resources.

Another relevant example can be found by observing the relationship between parents and their children. In many cases, the arrangement dictates that a parent will provide for their children in their early years, in exchange for them providing love and support to the parents in the future.

Having multiple children is effectively establishing a redundant system, as each child has the potential to provide you with unique outcomes that could enhance your life in one way or another. Though, you should also see the value of redundancy from another perspective in this situation.

If you are busy and unable to tend to the needs of your children, you have a redundant system set up to ensure that your children have someone to spend time with and learn from. If you teach the eldest son the values you hold dear, you’ve established a redundancy that will increase the odds of your youngest children learning the things you want them to know. Even if you don’t have the time to teach your youngest children, the oldest child is a backup that will get the job done for you.

The Dangers of Redundancy

This danger is perhaps most easily understood through a simple example from the commercial aircraft industry. Aircraft manufacturers have to determine how many engines to use on jumbo jets. Cost is clearly an important factor entering their calculations. Yet so is safety, since each additional engine on an aircraft both increases the likelihood that the redundant engine will keep the plane in the air if all others fail in flight and increases the probability that a single engine will cause an accident, by blowing up or starting a fire that destroys all the other engines and the aircraft itself.

...I assume that 40% of the time that each engine fails, it does so in a way (such as starting a catastrophic fire) that causes all the other engines to fail as well.

Aircraft manufacturers make similar calculations in order to estimate how many engines would maximize safety. Boeing, for example, used such an analysis to determine that, given the reliability of modern jet engines, putting two engines on the Boeing 777, rather than three or more engines as exist on many other long-range aircraft, would result in lower risks of serious accidents.

In more complex systems or organizations, however, it is often difficult to know when to stop adding redundant safety devices because of the inherent problem of predicting the probabilities of exceedingly rare events.

The second way in which redundancy can backfire is when diffusion of responsibility leads to “social shirking.”

This common phenomenon—in which individuals or groups reduce their reliability in the belief that others will take up the slack—is rarely examined in the technical literature on safety and reliability because of a “translation problem” that exists when transferring redundancy theory from purely mechanical systems to complex organizations. In mechanical engineering, the redundant units are usually inanimate objects, unaware of each other’s existence. In organizations, however, we are usually analyzing redundant individuals, groups, or agencies, backup systems that are aware of one another.

The third basic way in which redundancy can be counterproductive is when the addition of extra components encourages individuals or organizations to increase production in dangerous ways. In most settings, individuals and organizations face both production pressures and pressure to be safe and secure. If improvements in safety and security, however, lead individuals to engage in inherently risky behavior—driving faster, flying higher, producing more nuclear energy, etc.—then expected increases in system reliability could be reduced or even eliminated. Research demonstrates, for example, that laws requiring “baby-proof” safety caps on aspirin bottles have led to an increase in child poisoning because parents leave the bottles outside the medicine cabinet.

Consider the overhead required to perform a task as basic as applying for a passport. The system is designed to ensure that personal information is not leaked and that the passport is issued appropriately. The process requires the submission of specific paperwork, that must be filled out according to the department’s rules. Upon submission, the documents are processed at a local U.S. Passport Office. It takes up to eight weeks to verify the applicants’ identity and issue the passport, giving the administration more than enough time to check the applicants’ information thoroughly.

If a passport is issued to the wrong person, there can be grave consequences. Breaches of border security and fraud are two potential outcomes. The U.S. government set up a redundant system that takes ample time because its goal is to prevent errors. If errors do occur, the lifecycle of each application is long enough that mistakes can be fixed before it’s too late.

All forms of engineering have the addition of backup and redundant capacity at the heart of their systems. Large data-oriented enterprises even go as far as having multiple data centers located across multiple continents to ensure that catastrophic events don’t cause irreparable damage.

Most of the critical parts in many consumer-facing products also have redundancies implemented in some way. For instance, most drivers carry a spare tire in their trunks. At a broader scale, consider that the majority of airplanes have two to four engines to ensure that engine failure won’t cause a catastrophic incident.

When investing, you never want to put all of your eggs in one basket. Setting up redundancies in your investment strategy can protect you from unexpected changes to the market, allowing you to make adjustments when necessary without risking your entire investment.

Cash savings are also a good redundancy for investors. If you keep a nest egg, you can invest more confidently because your risk is secured to an extent.

In business, it is important to have redundancies set up as a failsafe.

What about employees who get sick?

You’ll need someone to cover for them too.

You see, in business, you have to be able to adapt to any situation. Having redundant systems built into your operations will ensure that you and your colleagues are all in the best position to adapt to unique business circumstances.

U.S. public schools use redundant systems to ensure that students have at least some skills that can be leveraged in the workforce. While schools cannot offer students a customized curriculum based specifically on their interests, they can offer a broad range of topics, which offers students exposure to as many subjects as possible.

Even if one student, for instance, doesn’t enjoy mathematics, the system will eventually expose them to content that fits their particular interests. While the coursework may not be adapted to allow the student to learn as much about the subject they are interested in as possible, the redundancy has allowed that student to find a topic of interest that they can study on their own.

This will increase their chances of developing unique skills that are valuable to the workforce.

Higher education institutions offer similar backups and redundancies. For example, even though students choose one major normally, it is possible to pursue multiple degrees at once. Choosing to do so provides graduates with security, as a dual-major graduate will likely be well-suited for more jobs than candidates who only have a single degree.